Athletic conquer Butarque as they continue on their quest for Europe 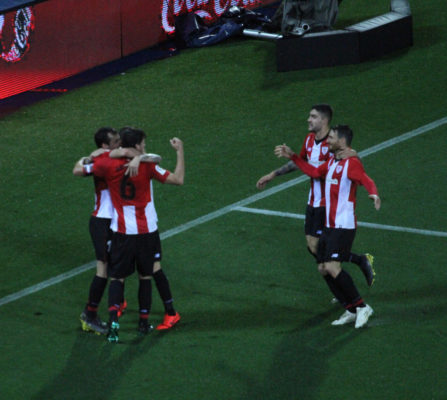 Garitano: I’m pleased that the team won at such a difficult place

Ahletic Bilbao defeated Leganés on a rainy Wednesday night on Match day 34 of LaLiga. The only goal came from Leganés striker En-Nesyri who headed the ball into his own net. The Basque team cement their place in seventh position which would see them qualify to play in the Europa League next season. For the ‘Pepineros’ it was back to back defeats following a loss to Villarreal at the weekend. Despite failing to pick up points from their last two games they remain clear from relegation.

A little more than 4000 people gathered at Butarque on a cold, miserable night in the Spanish capital. Andriy Lunin made a rare start in goal for the locals. Veteran striker Aduriz was leading the attack for the Basque side.

Kick-off was postponed for 5 minutes due to an issue involving the VAR system. The game was a fair reflection of the weather, miserable and uninspiring. Kravets was the main outlet for the home team in the first half. His shot from long range flew just over the bar while another attempt was trapped by Athletic goalkeeper Herrerin. The visitors created a chance to score via a corner kick but Martinez’ header failed to trouble Lunin. It was precisely from a corner kick from which Bilbao took the lead. Just before the interval Leganés forward En-Nesyri got his bearings all wrong as he bizarrely headed into his own net.

The home team started the second half on the front foot desperately looking for an equalizer. Right wing-back Juanfran was putting in cross after cross into the visitors box but with no end product from the strikers. En-Nesyri had a chance to redeem himself but his attempt from a volley never troubled the Athletic Bilbao keeper.

The visitors should have doubled their lead as Iñaki Williams dribbled his way into a one-on-one opportunity with the keeper. Williams however shot straight at goalkeeper.

Leganés piled on the pressure in the final few minutes but failed to find a way through. Gumbau had an attempt from a free kick in the dying moments but the midfielder sent the ball high over the bar. The final whistle brought with it plenty of celebrations from the 200 traveling Athletic Bilbao supporters who had made the long and worthwhile trip down south. Final score: Leganes – Athletic Bilbao 0:1

Gaizka Garitano was delighted with his team’s performance and three points. “This is such a hard place to win. None of the top six teams did what we have done tonight.” Asked about European ambitions Garitano remained calm “I prefer not to think about the long-term future. We need to focus on our next game against Alavés on Saturday because if we lose, it will make our victory today seem pointless.