Home  |  Noticias  |  Actualidad  |  portada  |  Semana Comunicación  |  #CoWeek21 Eliminating stereotypes: Majid Al Suwahidi, ambassador of the United Arab Emirates in Spain shares with the students of the Universidad Europea how they set themselves apart

#CoWeek21 Eliminating stereotypes: Majid Al Suwahidi, ambassador of the United Arab Emirates in Spain shares with the students of the Universidad Europea how they set themselves apart 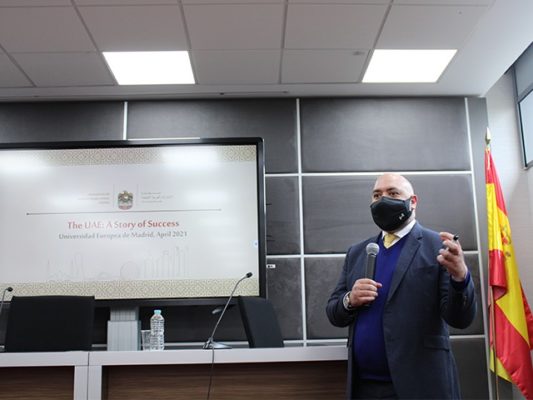 During the conference this Thursday the ambassador spoke about relevant topics like the role of women, what makes their country successful, climate change and their famous EXPO which will take place in 2022.

There are a lot of stereotypes and biases regarding the United Arab Emirates, some of which may affect the good aspects of a country. Starting from the beginning, he asked the audience to think about all the biases that were being brought to this conference and following that he created a more open environment to start off. With this positive start he was able to address a more colloquial conversation while still talking about interesting topics. An emphasis was made in the roll that women have. As his excellence insisted, they are very proud and seek to promote women not only in their jobs but also in the important role they preserve in society. One of their main tasks is to tackle extremism.

“The UAE falls between the space of a developing country and a developed country”, said Suwahidi when speaking about what sets their nation apart from others. They portray their countries economy as a hub, encouraging and promoting entrepreneurs by having a free market economy. He also shared some more information on the 6 killer apps that makes the UAE a successful country; competition, property rights, science, medicine, the consumer society and the work ethic. Between these, he expanded more information and interesting facts that added a more context for the audience.

Climate change has been on every international agenda nowadays, and it is definitely one of the major topics during this meeting. Part of their plans is to be deeply committed to tackling climate change. They aim to have 50%of their energy generated by renewables in 2050. Besides from being an incredible improvement for greenhouse emissions, it will also bring more than 90,000 jobs. They think of climate change in a practical result way, and since they consider themselves a hub they think about their situation and how they are going to deal with it in a global context.

His calm and inviting attitude set the tone for the students to carry out as many questions as they liked. The Universidad Europea in Villaviciosa created a productive and positive encounter both for his excellence and for the attenders so a relevant and interesting conversation could be carried out. As Suwahidi shared, Spain and the United Arab Emirates share a lot of things regarding their culture. This and many other things that he shared contributed to make la Semana de la Comunicación a rewarding experience both for the students and teachers involved.