Home  |  Noticias  |  Deportes  |  Fuenlabrada bounces back with a win

Fuenlabrada bounces back with a win 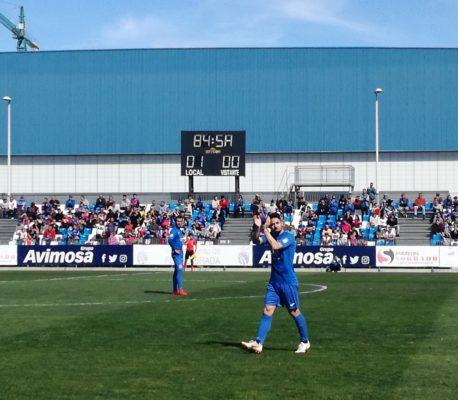 Mere: “I’m pleased with the victory. It was a complicated match but we managed to get the three points.”

Fuenlabrada continue their promotion chase after defeating Las Palmas Atletico 1:0 through a first-half goal from Hugo Fraile. The Madrid based team remains second in Segunda B, Group 1, only a point behind Atletico Madrid B. The visitors finished the game with 10 men after defender Jeremy was sent off for bringing down an opposition striker.

The Fernando Torres stadium remains a fortress as the Blues have now won 10 games and lost only once in front of their home fans. The victory made up for their loss away at Pontevedra last weekend.

Fuenlabrada coach Baldomero Hermoso ‘Mere’ was delighted with this team’s character.  “We didn’t have a good second half but we coped well. Sometimes you suffer in games like that but you still have to hold on. That’s important for the character of the team.”

One of the main reasons for Fuenlabrada’s great season is their solid defense. The team has conceded the lowest amount of goals in the league, just 16.
“We are a team that is well organized defensively With the exception of last weekend’s loss where we conceded three, our intention is to always keep a clean sheet.”

Asked about the attitude of the team coming into the business end of the season, Mere assured: “We are going into it with a calm attitude. There’s not much left to go until the end of the season, only 11 games. We are where we need to be so we are confident.”

Next week, Fuenlabrada face leaders Atletico Madrid B in a crucial clash for the playoff spots in Segunda B division. The Colchoneros won away at Celta B on Sunday afternoon to remain top. As for Las Palmas Atletico, they face another tough test at home to Ponferradina, another club with playoff ambitions.