Getafe wins and looks towards Europe 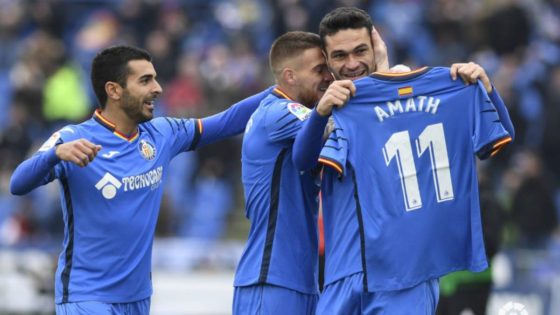 Getafe defeated Real Sociedad 1-0 at the Alfonso Pérez Coliseum on Saturday through an early goal from Jorge Molina. The visiting team had most of the possession and chances but didn’t manage to score against one of the best defenses in the league. The club from south Madrid climbs up to 6th position which will see them playing in the Europa League should they maintain it until the end of the season. Real Sociedad suffers third straight defeat and is now only 5 points away from the relegation zone. Goalscorer Jorge Molina was reserved when asked about European football ambitions after the game “We’ve shown a great effort today, we remain calm and focus on our next game.”

Getafe welcomed Real Sociedad on Saturday afternoon in the second match of LaLiga’s 16th round. Following a 1-1 draw in last weekend’s Madrid derby against Leganes, the hosts were sitting in 8th position, only a point away from the European qualifying spots. The visitors from San Sebastian lost at home to Valladolid but they were hoping to put things right this time around as they flaunted the second best away record the league after Barcelona. Team coaches José Bordalás and Asier Garitano faced each other for the first time after having worked together at Alicante at the beginning of their careers.

The hosts were quick off the mark and managed to score in the 3rd minute. Away’s team goalkeeper Miguel Angel Moya came out and cleared a dangerous through ball which went straight into Jorge Molina. Getafe’s number 19 lobbed the keeper from outside the box, scoring his 5th goal of the season. In his celebration, the striker paid homage to fellow Getafe teammate Amath Ndiaye who was recently ruled out for six months due to injury. Getafe almost doubled their lead in the 16th minute when a brilliant curled shot from Djene hit the post. The visitors had a great chance to equalize in the 19th minute when Illarramendi sent Juanmi through but the latter couldn’t convert and shot straight at the keeper. Real Sociedad was close again in the 36th minute after Mexican international Hector Moreno’s header was saved by David Soria but the play was ruled out for offside. Nerves started to escalate as both teams committed an array of fouls and got into the referee’s book with 2 yellow cards each. Getafe went into halftime with the 1-0 lead.

The start of the second half saw Real Sociedad continue to chase the equalizer. Juanmi had two clear-cut chances to find the back of the net. First, his header produced a brilliant save from Getafe’s goalkeeper, then a powerful shot went just wide. The home team was happy to concede possession and keep things tight at the back, maintaining the lead. Visitors’ team manager Garitano attempted to freshen his attacking options and introduced Belgian international Adnan Januzaj in the 68th minute but it didn’t seem to have an effect. Real Sociedad’s Theo Hernandez went down in the box in the last minute of added time but referee Santiago Jaime waved away the penalty claims.

The last round of the calendar year sees Getafe traveling to Girona to face a direct rival for the European positions while Real Sociedad host high-flying Deportivo Alaves.