Home  |  Noticias  |  Deportes  |  Zidane: We have to finish the season strong

Zidane: We have to finish the season strong 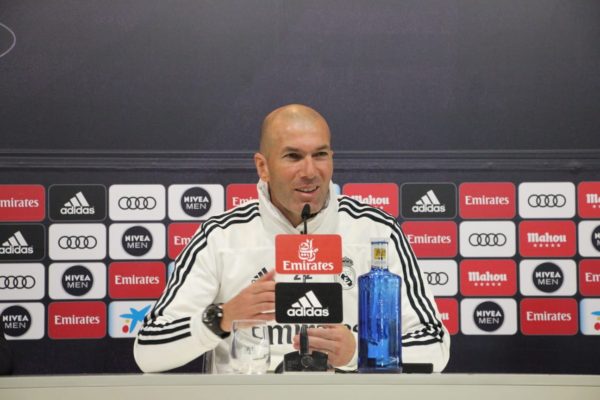 Manager Zinedine Zidane addressed the media before Real Madrid host Eibar on Saturday. The Frenchman will manage his 100th LaLiga match and will be looking to bounce back from the defeat at Valencia midweek. Eibar were victorious at home against Rayo Vallecano but the Basques have only won once away all season, back in October last year. Here is what Zizou had to say during the press conference.

Our opponents were better on the day. But it is not true that we played badly. We did some good things and we have to focus on those. The loss hurts but dwelling on it is pointless. We are going through a tough time but I saw a team out there that was motivated to do well. I liked our effort but we lacked sharpness in front of goal. What we want to do is to improve our game and get a result on Saturday.

We have to admit we’ve had problems in front of goal this year. We have to change those stats next season. I’m not worried about that now. We’ve had a complicated season. But why don’t we talk about what these players have won? The necessity of this club is to return  to winning ways. We have to win the remaining eight games.

I’ve lived through the same situation as a player. It’s not easy when you find yourself in a season like this. We were second in the League, knocked out in the semifinals of the Copa del Rey and also the last sixteen of the Champions League. Those things happen in football. We have to accept it. I tell the players that the best way to get out of this is to keep working and when we get a chance to play a game, to win it. It doesn’t matter if there’s a trophy at the end or not.

It is going to be a difficult game. Eibar are a team that likes to play football. They are having a good season and Saturday’s game is a great chance for them to prove it.

I love him as a player and person. He has a contract at the club just like the rest of the players. We will see come the end of the season.

We have always been up there both domestically and in Europe. I don’t want to take anything away from Atletico, especially during the last few years. But no one can deny that Real Madrid always compete at the highest level in every competition. It is expected of our club each year.